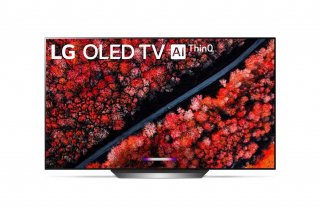 If you’ve long been an OLED fan but just couldn’t pull the trigger on 75-inch-plus models because of the sky-high price points, you may have just caught a huge break.

If you head into your local Best Buy right now, you can get yourself LG’s 77-inch C9 OLED for $4,500, which is a grand off the regular price. The advice is to jump on this fast if you’re keen on this monster set, as the sale probably won’t last for much longer.

In the cutthroat high-end HDTV war, the Korean company’s OLED technology is more often than not considered the best on the planet, and it has proven on an annual basis why it should be the standard for all OLED TVs currently out on the market.

As for the C9 in particular, this highly regarded set has no problems checking off all of the boxes of what you would desire in a high-end panel. It features one of the best image qualities ever tested on a TV, delivering perfect deep black levels, precise colors, unmatched wide-viewing angles and outstanding uniformity.

Even if your living room is sun-drenched on those hot, summer afternoons, this TV’s brightness level should take care of any annoying glares and reflections.

The C9 also boasts most of the ancillary perks that you want in a high-end TV, such as the much-coveted HDMI 2.1 features—including eARC—and comes with support for Amazon Alexa, Google Assistant and Apple AirPlay 2. The HDMI port can easily handle 4K at 120fps.

The handy remote control also lets you speak to, and hear from, those voice assistants. The webOS smart TV operating system, though considered a step behind Roku and Android TV, is fluid and mostly user-friendly as well, so getting to your favorite streaming app or on-demand content will surely be a snap for family movie nights.

Because of the much-praised organic light-emitting diode technology, there is no backlighting to be found, so the overall design is sleek and slim—in fact, the C9 is thinner than many smartphones out there.

Another great aspect of the C9 is that it is compatible with Nvidia G-Sync and boasts superb variable refresh rate and extremely low input lag, which will surely be appreciated by any gamer out there waiting patiently for the next-generation consoles from Sony and Microsoft.

There are, however, a few caveats to be aware of. In addition to the ever-present risk of image retention and burn-in that have dogged OLED panels since their inception, LG recently announced that it has decided to recall about 60,000 OLED HDTVs in South Korea to replace power boards that have the potential to overheat.

LG noted that it has already repaired 22,000 of the affected sets. OLED TVs sold overseas are not currently subject to the repairs, the company added, but it is “investigating other markets” for potential safety issues.