Threatening Military Attack on Iran Is Against the U.S. Interest 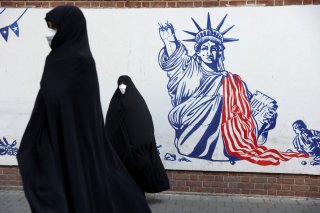 Maybe it’s because negotiations on restoring compliance with the Joint Comprehensive Plan of Action (JCPOA)—the multilateral agreement restricting Iran’s nuclear program—are set to resume this month that calls for threatening an attack on Iran seem to be back in vogue. Or maybe it’s just that those who habitually favor confrontation and oppose diplomacy with Iran happen to be voicing their familiar themes all at once. Whatever the reason, appeals for enhanced saber-rattling directed at Iran have come recently from several voices, including both Dennis Ross and Michael Singh of the Washington Institute for Near East Policy and Blaise Misztal and Jonathan Ruhe of the Jewish Institute for National Security of America (JINSA).

The saber-rattlers get some things right. The JINSA authors, for example, are correct in describing Iran’s acceleration of its nuclear activities during the past couple of years as a bargaining chip intended to induce the United States to negotiate seriously, which is basically the same way the Iranians were using an expanding nuclear program when the JCPOA was first being negotiated. The rhetorical line of the JINSA authors is strained and self-contradictory, however, in trying both to downplay the significance of Iran’s recent nuclear enhancements—by way of arguing that the United States does not need to make any concessions anytime soon at the negotiating table—while also contending that the same nuclear program is so ominous that it warrants a threat of war.

On the other hand, Ross doesn’t agree that what Iran has done with its program during the past two years is only a bargaining ploy and suggests that Tehran may be deliberately pursuing a nuclear weapon “threshold capability”—the same suggestion that was heard repeatedly from the same quarters when the JCPOA was first under negotiation. But neither Ross nor anyone else has ever explained how that suggestion squares with the strategic decision that Iran evidently made in entering the JCPOA in the first place. Disposing of 97 percent of Iran’s enriched uranium, filling nuclear reactors with cement, and taking all the other restrictive measures Iran took under the JCPOA while opening its program to highly intrusive international monitoring would be a bizarre way, to put it mildly, of trying to reach a threshold from which a nuclear weapon could be made quickly.

If Ross is now saying that it is only more recently that Iran started seeking a threshold capability, then blame that development on the Trump administration’s folly of abandoning the JCPOA, not on some longstanding and unstated Iranian scheme.

Ross acknowledges how isolated the United States became from the other JCPOA parties under the Trump administration but has an odd way of trying to overcome the isolation. He correctly notes that Russia, China, and the Europeans don’t want a new major armed conflict in the Middle East. However, he contends that his formula for isolating and threatening Iran is the way to assuage their concerns because, he says, such threats are needed to contain the Iranian nuclear program, which, if not contained, “would produce” the feared major new armed conflict. Most analysts of Russian, Chinese, and European thinking would be unlikely to agree that issuing threats of armed attack would reassure those governments regarding the dangers of a new war in the region, rather than just alarming them more.

Missing from all of the saber rattlers arguments is the central fact that after the JCPOA was signed, it was working; It closed the paths to a possible Iranian nuclear weapon, and Iran complied with all of its restrictions until a year after the Trump administration totally reneged on the U.S. obligations under that agreement. It is because of that reneging, not because of some new game that the Iranians have decided to play, that the current diplomatic impasse exists.

None of these authors come close to describing accurately the nature of that impasse since negotiations began in Vienna on restoring compliance with the JCPOA. Singh speculates that the Iranians may “doubt the Biden administration’s willingness to enforce sanctions in the absence of a deal” and be trying to leverage expanded relations with China to prosper in a world with no JCPOA. Ross writes about the Iranians trying to get more sanctions relief “than they are entitled” while being subject to fewer nuclear restrictions.

In fact, the Iranian administration of President Hassan Rouhani, who was in office until August of this year, made clear that Iran would accept a clean, simple return to the JCPOA as originally negotiated. This Iranian position was underscored by Tehran’s continued observance of the JCPOA limits for a full year after the U.S. reneged. That a return to compliance has not happened this year can be attributed more to the Biden administration’s dilatoriness and introduction of new demands than to Iran playing a new game.

To the extent that Iran has countered with a new demand of its own, it has centered on getting assurances that it will receive all the economic relief it was owed under the original agreement. The enforcement side of the JCPOA is very one-sided and stacked against Iran. It provides for the semi-automatic reinstitution of sanctions in the event of any Iranian violations but makes no provision for what to do in response to violations by the United States or other parties. Iran’s call for “guarantees” against any future U.S. reneging may be beyond the ability of any U.S. president to promise, but the Biden administration has not helped matters by reportedly declining to offer an assurance of compliance even during its own tenure.

The well-founded Iranian skepticism about U.S. reliability also would not be helped by Ross’s suggestion of offering only partial relief from sanctions that were supposed to be removed by the JCPOA in return for full Iranian return to limits on uranium enrichment and other restrictions. Tehran almost certainly would dismiss any such formula as a North Korean-style attempt to sell the same horse twice, with the price having increased in the interim.

The most dangerous idea in any of these pieces is Ross’s recommendation to provide Israel with 30,000-pound bunker-buster bombs and to lease to Israel B-2 stealth bombers to deliver them. Ross’s ostensible rationale is that the threat of Israel using these munitions would somehow lead Iran to make concessions that it never made during the long negotiations that produced the JCPOA. But the Israeli government, like its predecessor, has no interest in anybody negotiating an agreement on anything with Iran. Instead, for reasons that go well beyond Iran, Israel favors a state of permanent confrontation and hostility with Iran, and it has endeavored to undermine, not support, diplomacy with Tehran.

Israel’s sustaining of that confrontation has taken many forms short of aerial bombardment, although Israel has been doing plenty of its own saber-rattling in that regard. Curiously, Ross notes in his piece that the Biden administration complained to Israeli officials—as Ross says he “learned recently in Israel”—that Israeli sabotage earlier this year against a couple of Iranian nuclear facilities was counterproductive in that Iran’s response was to increase its level of uranium enrichment and accelerate work on uranium metal fabrication. But Ross never acknowledges the counterproductivity of such sabotage and instead merely changes the subject.

Meanwhile, the extent to which Israel’s attacks against Iran have nothing to do with obtaining a nuclear agreement is highlighted by how some of the most recent sabotage seems aimed at just making the lives of the Iranian middle class miserable.

Encouraging, not Deterring, an Iranian Nuke

The Iran hawks’ calls for threatening military attack often refer, as Ross does, to “restoring deterrence.” But such talk grossly misrepresents how deterrence works, which involves punishing undesirable behavior and assuring an absence of punishment in response to the desired behavior. Punishing the other party, no matter what it does, which was the centerpiece of the Trump administration’s policy toward Iran, destroys deterrence rather than establishes or restores it. So do threats of attack when they come from the side that reneged on an agreement and are directed against the side that observed the agreement and only wanted to restore compliance with it.

Speaking of deterrence, nothing would be more likely to strengthen the arguments of hawks in Tehran who believe Iran needs a nuclear deterrent—which in the past it had taken some steps toward acquiring—than threats of foreign military attack against their country.

Thus, the threats that the saber rattlers want the United States to make would have one of two likely results. One would be a new war in the Middle East, with the attendant costs and consequences of such a war and with Iran responding to a military attack in ways of its own choosing. As far as Iranian nuclear weapons development is concerned, such an attack would likely be as counterproductive as it was the previous time that Israel tried something similar in that part of the world, when an Israeli airstrike stimulated an accelerated Iraqi program to build a nuclear weapon. The other possible result would be no war but also no new agreement and thus new doubts about the credibility of what the United States says and what it threatens.