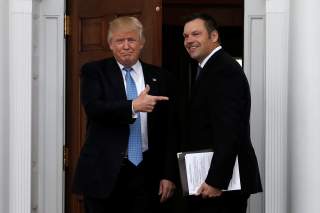 The Trump administration is treating immigration as a national security issue.

Donald Trump and his entourage have linked their approach to the Middle East and Latin America to what they argue is a crisis. Some in the orbit of the White House such as Fox News personality Col. Douglas MacGregor (considered previously for national security advisor) are proposing militarizing the border with Mexico. That clamping down on migration—illegal and potentially legal, as well—is at the core of the president’s political mandate is relevant. Clearly, the president has struggled, mightily, to please an increasingly impatient—though steadfastly loyal—base.

The latest episode of the drama comes this week, as Trump and his team consider shutting down the southern border in its entirety. But long-term, the president clearly feels he needs to show that he’s got a grip on his core issue: he wants an immigration czar. But who? Two names, both faded, defeated political commodities in their states, but popular on the broader national scene, are surfacing: One is Kris W. Kobach, who ran for Kansas governor and the other Kenneth T. Cuccinelli, who enjoyed a turbulent tenure earlier this decade at the Virginia Attorney General’s office, before emerging as a surrogate for Ted Cruz.

Immigration hawks and populists helped vault Trump to power—anchored around media personality Ann Coulter, who now has an uneven relationship with the president—have a clear favorite: Kobach.

“It’s vital that this administration brings in Kobach,” pro-Trump prognosticator Ryan Girdusky of One America News told me, hinting at the White House’s staffing troubles. “He understands the issue and Trump’s base—far more than most people in Trump’s administration.”

Indeed, Trump feels pressed to get tough. The concern isn’t so much that he’d be vulnerable to a primary challenge—with an all-time high GOP approval rating, such notions are laughable, whatever NeverTrumpers may say. But further dithering on immigration could dull enthusiasm for his encore effort, even slightly—Mitt Romney saw millions of evangelical voters stay home in 2012. “Kobach would actually ensure that our immigration laws are enforced, our border is secure, and signal to Trump’s base that he hasn’t abandoned us on the issue—which is vital leading up to 2020,” Girdusky says.

For Kobach, it would conclude a long journey into the administration. He was considered for attorney general (AG) during the 2016 transition, as well as Homeland Security chief—before appearing to overtly tip his hand on clampdown plans. Indeed, my own reporting last year detailed how Kobach was actually offered the post at DHS in 2016, only to have that offer revoked, at the knife-fighting urging of Republican moderates John McCain and Lindsey Graham. After Trump became president, Kobach was also the head of Trump's abortive voter fraud commission.

Virginia veterans doubt Cuccinelli’s candidacy. Those who worked on the surprisingly bitter, 2009 AG campaign between Cuccinelli and Virginia attorney John Brownlee note how Cuccinelli was the relative immigration dove—dragging his fight on a vigorous implementation of E-Verify, the sine qua non of most immigration hardliners. Cuccinelli, one veteran of Brownlee’s campaign told me, in the Tea Party spirit, focused instead on cutting Brownlee down to size for not being requisitely small-government.

For Cuccinelli, small government advocacy, even post-2016, is a political raison d’etre, making an immigration placement an odd fit. The former Virginia politician was also an inveterate Trump critic, infamously throwing down the gauntlet, such as it was, at the 2016 Republican convention in protest of perceived Trumpist hijinks to solidify the nomination. Of course, NeverTrumpers and the like have since secured placement in the administration, especially following the exodus of Trump adviser Stephen K. Bannon. Just take a look at Mike Pompeo’s State Department these days. “Yeah, but Cuccinelli did it [registered his anti-Trumpism] on television,” says one Virginia political veteran. “It’s Kobach.”

Cuccinelli has not denied the report, however, and clearly wants back in the game. He’s been out of office since 2013—any longer, and it could be lights out on a forbidding political ambition. He’s long wanted to be president, Virginia political commentary Larry Sabato told me, no matter how steep the climb. “I’m surprised,” Sabato said to me earlier this week by e-mail. “Donald Trump the person isn’t Ken’s cup of tea, or at least that was true in 2016. But Ken is deeply conservative, so no doubt he approves of most of Trump’s policies. He’s a law and order type.”

Kobach’s the favorite, but if his candidacy stumbles, it could be because he runs afoul of a muscular duo—Mick Mulvaney, acting chief of staff, and Jared Kushner, de facto chief of staff. Mulvaney, like Cuccinelli, is still very much the tea partier, and Kushner favors a legal immigration increase. As a Trump campaign official told me earlier this year, there’s only one rule: don’t mess with Jared. Mulvaney, a foreign policy realist, has been a good soldier for the president’s ideas on Syria and Afghanistan, but on the border, he’s got a pretty laissez-faire past.

The war, as ever, is on for Donald Trump’s favor.