Will Russia and Turkey’s Proxy Wars Spiral Out of Control? 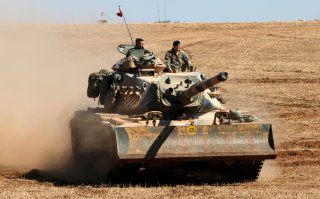 The story of the Ottomans and the Russians is an ancient one. The extensive list of conflicts between the two spans nearly 500 years, with battles across Europe, the Middle East, and Africa. Both have experienced meteoric rises and slow decays, periods of irrelevance on the global stage, and now, most importantly, a coupled rebirth as shadows of their former empires. But what has not changed throughout the centuries are the battlegrounds and areas of influence where the two compete.

A cursory glimpse at a map of both the Russian and Ottoman Empires quickly illuminates why this is so. Both empires shared borders in the Balkans, the Caucasus Mountains, and, at times, Ukraine. As a historical generality, any two countries or empires that share a border are bound to enter into conflict sooner or later. In this case, it is important to understand that Russian and Ottoman territories in the periphery frequently changed hands. A city could find itself a possession of the Ottomans in one century, while in the next it would be under the protection of the tsars of Russia. With this historical context in mind, it is easy to understand why both Turkey and Russia continue to compete for influence over these areas: they have historically been possessions of both empires, and significant cultural and historical value is placed on them. In more recent years, this long-running contest of influence has manifested itself in nearly half a dozen conflicts. While they may seem distant and unrelated in a history book, these wars are strategically linked.

The first is the First Nagorno-Karabakh War, which began in 1988 and featured the militaries of Armenia and Azerbaijan, two countries in the Caucasus. For those unfamiliar with this region, it is situated between the Caspian Sea in the east, the Black Sea and Turkey in the west, the Caucasus Mountains and Russia to the north, and the Persian deserts to the south. Historically, the Caucasus region was used by the Ottomans and the Russians to invade each other. This became true again in the modern era, as post-Soviet Russia sought to exert its influence over Azerbaijan and Armenia and broker a peace deal between the two nations. It was an awkward position for the Russian Federation for two reasons. First, the conflict was between two former Soviet satellite states, with many Soviet veterans volunteering to fight for both sides. Second, Russia had to contend with other nations interfering in its former sphere of influence by supporting Armenia or Azerbaijan. In this case, Turkey chose to support Azerbaijan.

This was the first time in the modern era that Turkey and Russia behaved as old adversaries who had been in tension for hundreds of years—even if it wasn’t intentional. By choosing to support Azerbaijan, Turkey was weakening Russia’s influence in the region and setting the conditions to threaten Russia’s allies in the future. For Turkey, this conflict has become a perpetual thorn in the side of Russia, with the constant threat of war and refugees situated on the Russian border. Over the course of the last two years, the Nagorno-Karabakh conflict has repeatedly reignited with the momentum squarely in favor of Azerbaijan. Since 2020, Turkey and Russia have discussed the matter several times, but violence flared up again just this month.

The second conflict of significance in the modern era was the Kosovo War and the breakup of Yugoslavia, which again occurred in a region where both Turkey and Russia had historical and ethnic ties. Because of this history, both countries sought to act on the world stage to influence the war. The conflict served as another wake-up call for Russia—this was the second time a former Soviet area of influence had fallen into war, and other nations had intervened to tip the balance against Russian interests. Turkey, meanwhile, was realizing that it had been able to achieve limited goals in both the Nagorno-Karabakh War and now in the Balkans. Additionally, like the Nagorno-Karabakh War, tensions again began to rise in the Balkans in late 2020, with reports of clashes on the Serbia-Kosovo border as recently as last month.

The next string of conflicts drastically changed the strategic landscape for both Russia and Turkey. Long-time Russian allies Syria and Libya both collapsed into civil wars in the spring of 2011. Russia intervened in 2015 on behalf of Bashar al-Assad and stabilized his hold on power. Turkey intervened in Syria in 2016, pushing across its southern border and seizing territory. For the first time, Turkey directly intervened in an area of Russian influence and threatened the territorial integrity of a Russian ally. This pattern of intervention also spread to Libya.

Details are scant, but at some time in 2019, the Wagner Group, a Russian private military company, appeared on the battlefield in Libya and supported the Libyan National Army and the Libyan House of Representatives, one of Libya’s two competing governments. One year later, in 2020, Turkey began providing military support to the Government of National Accord, Libya’s UN-recognized government. Both Syria and Libya became frozen conflicts after Turkey and Russia held a long series of conferences and negotiations. A repeated pattern had now emerged.

Where Russia appeared within arm’s reach of Turkish influence, Turkey could and would react. It was never enough to bring both countries to war, but enough to tip the scales toward balance or just slightly in favor of Turkish interests, forcing Russia to concede something during negotiations. If Russia suddenly had an upper hand in Syria, Turkey could instigate in Libya, a round of negotiations could take place, and both could settle on an acceptable outcome. This pattern could play out endlessly as world events changed, economies grew and withered, or governments collapsed. If one country found itself losing in both Syria and Libya, then provocations in Azerbaijan or Armenia could compel the other to the negotiating table again. It appears that there were too many frozen conflicts for each to effectively manage, but just enough to force concessions when it was necessary. This balance seemed sustainable—until the Russian invasion of Ukraine in 2022.

In its preparations to invade Ukraine, Russia massed much of its combat power from across its territory and concentrated it in Europe. The move was nothing short of a great gamble. It appears now that Russian leader Vladimir Putin believed that Ukraine would collapse quickly and be absorbed into the Russian Federation. After six months of conflict, it is clear that he was wildly incorrect. Significant losses, international arms shipments to Ukraine, crippling economic sanctions, and embarrassment have thus far been Putin’s reward. Meanwhile, Turkey has been arming Ukrainian forces with drones, much like it did in Libya. Ukrainian officials have claimed that these drones have had a major impact on the battlefield and helped them thwart Russian offensives.

But now a new question hangs over all of these conflicts. With Russia failing to achieve its aims in Ukraine, flare-ups of violence in Serbia, Libya, and now Armenia and Azerbaijan, is the delicate balancing act coming to an end? Putin declared a partial military mobilization on September 21, and rumors have begun to circulate that he could declare martial law and announce a general mobilization for war in order to regain the upper hand in Ukraine. While this seems outlandish, it is important to remember that just six months ago, we were told a land war in Europe was a fantasy. And even if Putin chooses to de-escalate in Ukraine, Turkey continues to escalate the situation in Syria as it ponders pushing into more of the country. Libya’s frozen conflict also looks as if it too could be thawing, as violence broke out in Tripoli last month. And now, Azerbaijan and Armenia seem to be approaching the threshold of war. It appears that the delicate balancing act might finally be unraveling as nation-states sense that the initiative is shifting in their favor while the world’s greater powers have their attention elsewhere.