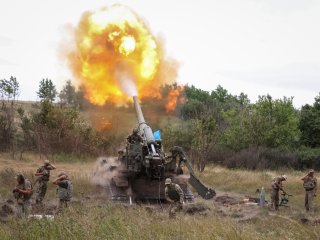 Kirill Stremousov, an official within the Russian-installed government of Kherson—the capital city of Ukraine’s southern region that Russia captured in the opening days of its invasion—claimed on Wednesday that the city’s planned referendum to join Russia would be “paused” in response to the ongoing Ukrainian counteroffensive.

In his remarks to Russia’s state-run TASS news agency, Stremousov also noted that the Antonivskyi Bridge, which connects Kherson to the Russian-occupied areas in southern Ukraine, could no longer be safely crossed after weeks of Ukrainian shelling and airstrikes.

The Russian-backed authorities of southern and eastern Ukraine have each announced their intent to hold referendums that would formalize their secession from Ukraine and integration into Russia. The international community has widely condemned the proposed referenda, characterizing them as a naked attempt by Russia to annex areas it had conquered through force in violation of the United Nations Charter.

Prior to the Ukrainian counteroffensive, pro-Russian officials in Kherson and elsewhere in Ukraine’s southern Zaporizhzhia region claimed that they would hold referenda in September. The Donetsk People’s Republic and Luhansk People’s Republic, the two pro-Russian separatist proto-states in eastern Ukraine which have maintained de facto independence since 2015, each indicated that they would also seek annexation into Russia. Russia’s recognition of the two regions, and the Kremlin’s deployment of “peacekeeping” troops into their territory, were two major proximate causes of the Russian invasion of Ukraine in late February.

Ukraine’s counteroffensive towards Kherson comes at the same time as an uptick of partisan activity against pro-Russian officials in the city and surrounding areas. Alexei Kovalev, a former lawmaker within Ukraine’s ruling “Servant of the People” party who defected to the Russian side at the beginning of the conflict, was assassinated on August 30. Earlier in August, Vitali Gura, a second member of the city’s ruling “civil-military administration,” was also shot and killed by unidentified assailants.

After its capitulation to Russian forces in early March, Kherson has been the first and only regional capital to fall to Ukrainian forces. Speculation that the city was betrayed by pro-Russian Ukrainians within Ukraine’s government and security services led to a series of internal investigations, culminating in the firing of two high-level officials within the government of Ukrainian president Volodymyr Zelenskyy in July.

Ukrainian officials have indicated that the counteroffensive, which began in late August, has recaptured several towns to Kherson’s north and west but that the city itself remained in Russian hands. Experts have argued that a direct frontal assault on the city is unlikely, citing Ukrainian conventional weaknesses, but argued that Kyiv’s forces could weaken the city’s defenses by preventing reinforcements and supplies from crossing the Dnieper River behind it.