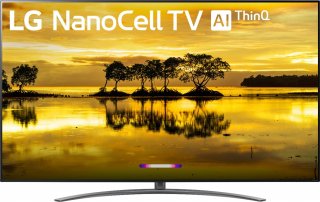 You can now toss in another player in the heated battle between Korean tech giants LG and Samsung.

Although most of the competition has been pitted between OLED and QLED panels, LG’s 86-inch Nano 9 Series is now taking direct aim at Samsung’s highly regarded HDTVs.

Considering that OLED and QLED offerings haven’t really entered the waters of the 85-inch-plus mainstream market, this 86-inch beast might fill a needed niche for consumers who not only seek unrivaled picture quality but also mammoth screen dimensions.

The 9 Series boasts outstanding 4K-image quality via its full-array LED backlight with local dimming. The highly robust α7 Gen 2 Intelligent Processor does a fantastic job in enhancing images and color and making the entire set operate without hiccups.

What really separates itself from most non-OLED competitors is that it has amazing wide-viewing angles, so if you have seating arrangements that wrap around the TV, you’ll surely notice the difference.

If you’re looking to turn your living room into an entertainment powerhouse, you’re off to a solid start here, as the 9 Series comes with both Dolby Vision and Dolby Atmos. This means that you’ll be on the receiving end of ultra-vivid pictures and immersive audio that will seem like it’s flowing all around you.

However, one particular issue that really irks many LG TV owners is the operating system, which is known as webOS. It lacks the innovative extras and app-based setup and coverage of Roku TV, Samsung’s Tizen or Sony’s Android TV. If you desire a bigger selection of apps, your best bet is to get an external streamer.