Pandemic Diplomacy: Is Trump's Offer of Aid to North Korea the Right Call? 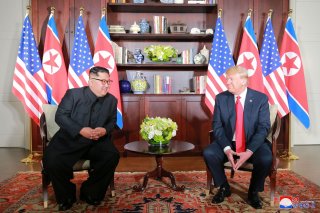 The coronavirus pandemic is an international problem that demands international solutions. This is true almost by definition, given that epidemiologists define a pandemic as “An epidemic occurring worldwide or over a very wide area, crossing international boundaries, and usually affecting a large number of people.” No government can protect its own citizens without working in league with others; as the United Nations Secretary-General has warned, the world is “only as strong as our weakest health system.” Yet despite more than 55,000 Americans now testing positive for the virus—over an eighth of the world’s total confirmed cases—the Trump administration has shown conspicuously little interest in pursuing global cooperation.

At first, there were signs that Trump might depart from his usual approach to foreign policy by accepting the need for international engagement. His administration worked in concert with the World Health Organization, for example, and just last month agreed to dispatch U.S. scientists to China as part of an international fact-finding mission. The President even requested that Congress allocate a hefty sum of taxpayers’ dollars toward stemming the tide of infections overseas.

But such indications that the United States might participate in a global effort to combat the present pandemic have since become few and far between. Instead, Trump seems to have settled upon a strategy of portraying the outside world as little more than a teaming mass of disease vectors. Most obviously, the President has taken to blaming China for the problems now facing the United States. But he also angered U.S. allies by imposing a ban on transatlantic travel without so much as consulting his European counterparts—an unapologetic act of contempt for some of America’s oldest and closest partners.

In fact, there is only one country with which President Trump has made a serious effort to improve relations since the coronavirus pandemic began: North Korea. Even here, however, the chances are slim that Trump will succeed at using the current crisis as an opportunity to bolster international cooperation.

On its face, it is not altogether surprising that Trump would single out North Korea as a worthy recipient of U.S. support during this time. Trump has made no secret of his desire for a diplomatic breakthrough with North Korea ever since his first meeting with Kim Jong-un in Singapore. He has put considerable political capital towards this end, from attending a second summit with Kim in Hanoi to becoming the first sitting U.S. president to cross over onto North Korean soil. So far, none of his overtures have borne fruit.

It thus makes sense that Trump would use the coronavirus pandemic to revive the peace process with North Korea by offering the carrot of humanitarian aid. After all, the ongoing warming of ties between China and Japan suggests that even longstanding enmities can be mitigated during periods of common struggle. It is not unrealistic to imagine that an ailing North Korean regime might be amenable to accepting help from the United States—perhaps even in exchange for a return to negotiations over its cherished nuclear program.

The problem, however, is that Pyongyang is not ailing—at least not yet. Totalitarian regimes do not rely upon the consent of the governed. Nor do they rely on the health of the governed. They achieve security by insulating themselves from the people and by wielding enormous coercive power whenever necessary. As a result, it remains to be seen whether the North Koreans will accept scientific and medical assistance from outsiders. Put simply, Kim and his henchmen might not feel the need—not even if the coronavirus begins to infect large swaths of the population. Their regime has weathered humanitarian catastrophes before and can probably do so again.

Indeed, rather than viewing the coronavirus pandemic as an opening to extend the hand of friendship to foreign powers, Kim and his advisers appear to view the present moment as yet another chance to expand and refine the North Korean armory through missile tests—a concrete reminder that the regime is primarily interested in its own survival, not the survival of elderly and infirm North Koreans.

For these reasons, Trump’s overture to North Korea is unlikely to catalyze a reinvigoration of U.S.-North Korean talks. The President might well be sincere in his wish to aid the regime in Pyongyang—not to mention the unfortunate millions who live under its dominion—and he is right to feel this way. (It would be good if he were similarly enthusiastic about improving some of America’s other bilateral relationships, especially the fraught U.S. relationship with Iran). But for international cooperation to flourish, both sides must want it to happen. The reality is that North Korea shows few signs of being interested.

Peter Harris is an Assistant Professor of Political Science at Colorado State University. You can follow him on Twitter at @ipeterharris.