Hands Off: United States Promises Taliban Not to Fund Rebels 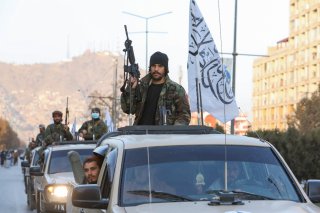 The U.S. government reportedly assured the Taliban during a set of negotiations in early October that it would not attempt to fund resistance to the new government—an announcement made after months of civil protests and escalating anti-Taliban militant activity across the country.

The alleged American assurances came to light after a Taliban official described a high-level U.S.-Taliban meeting—the first meeting between the former enemies since the assassination of Al Qaeda leader Ayman al-Zawahiri in Kabul in July—according to Qatar’s state-run Al Jazeera media network. The meeting took place in Doha, Qatar’s capital, and allegedly included a CIA deputy director on the American side. The U.S. State Department did not comment on the details of the meeting, but confirmed that it had taken place, stating that Washington would “continue to engage the Taliban pragmatically regarding American interests.”

During the meeting, Taliban officials voiced their opposition to President Joe Biden’s transfer of $3.5 billion from the reserves of Da Afghanistan Bank (DAB), the country’s central bank, into a Swiss trust fund to be used for humanitarian aid projects. The group declared in August that the move was “unacceptable and a violation of international norms.” It has also condemned Biden’s plan to distribute an additional $3.5 billion from the DAB funds to survivors of the September 11 terror attacks, a move that many Western commentators likened to theft.

Qatar has played a key role in mediation between the Taliban and the United States on previous occasions, and Doha was the site of a controversial agreement promising a future U.S. withdrawal from the country in February 2020—an agreement that detractors have warned played a critical role in the internationally-recognized Afghan government’s collapse in August 2021. The United States has accused the Taliban of violating that agreement by sheltering Zawahiri in Kabul, although Taliban leaders insisted that they had no knowledge of his whereabouts.

Over the past year, the Taliban has struggled to combat a growing insurgent movement within Afghanistan. Opposition to the Taliban has come both from more liberal groups such as the National Resistance Front (NRF), which has maintained an insurgency in the north, as well as from Islamist groups that regard the Taliban as insufficiently devout. Within the latter group, the most destructive opposition force has been the Islamic State’s Khorasan Province (ISIS-K), which has conducted a series of bombings against government targets and ethnic and religious minorities in order to undermine the Taliban’s promises to provide security.