Should the United States Turn Its P-8 Poseidons Into Anti-Ship Bombers? 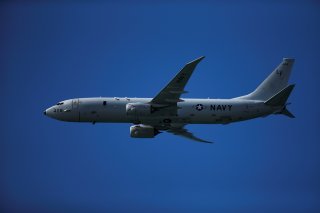 Here's What You Need To Remember: The demand for bombers that can both support troops on the ground and bring long-range anti-ship capabilities remains high—particularly as the Air Force is considering early retiring its B-1 bombers that brought both capabilities to the table, due to their operating costs and low maintainability.

Three other operators of the P-8—Norway, South Korea, and the United Kingdom—might be interested in the capabilities offered by upgraded Poseidons.  The UK fundamentally has an expeditionary military, but no longer has any long-range strike jets.  Norway has come under increasing pressure from Russian ships and land-based missile systems.  And South Korea is of course locked in into its long-lasting security competition with its northern brethren.

Sébastien Roblin writes on the technical, historical and political aspects of international security and conflict for publications including The National Interest, NBC News, Forbes.com and War is Boring.  He holds a Master’s degree from Georgetown University and served with the Peace Corps in China. You can follow his articles on Twitter. This article first appeared earlier this year.