Ukraine Reveals the Need for an ‘America First’ Foreign Policy 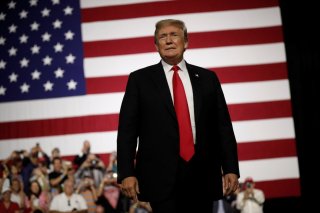 SINCE 1989 the United States has had an almost perfect record of winning wars and losing the peace—or failing to achieve peace in the first place. The scorecard begins not with the 1991 Persian Gulf War but with the proxy war against the Soviet Union in Afghanistan. Children of the 1980s can recall when Afghan freedom fighters were celebrated the same way the Ukrainians are today.

Losing the peace also means losing it at home. When Americans look back on a war, what do they see? Do they remember why George H.W. Bush’s approval ratings shot into the stratosphere in 1991, or do they remember the aftermath of “Gulf War syndrome” and domestic terrorism? Do they view the results of the Iraq War or Afghan War with pride or shame? Do they place more or less faith in the policymakers responsible for those wars?

Russia’s invasion of Ukraine is in one respect like the January 6, 2021 invasion of the U.S. Capitol. In each case, elites hoped that revulsion at a violation of sacred norms would lead to a reinvigoration of liberalism. In each case, that hope has been dashed. January 6 did not banish populism from the GOP or the GOP from American politics. And Russia’s aggression has not solved NATO’s long-term political crisis. If anything, the limitations of the “liberal international order” are more obvious than ever.

Expanding NATO to Sweden and Finland in no way expands the sphere of liberalism or democracy; it makes two more wealthy, stable, and free countries security clients of the United States. And as encouraging as it may be to see the Germans willing to spend more of their own money for their defense, Hungary’s continued consumption of Russian oil shows there is a ceiling to how much economic self-sacrifice can be expected, or demanded, of NATO members.

The developing world, meanwhile, has demonstrated little enthusiasm for the West’s efforts against Russia. Within the West itself, polls that show surging support for the alliance are belied by political developments that indicate such support is skin deep. Marine Le Pen did not suffer in France’s recent presidential election from any perception that she was soft on Vladimir Putin. In the United States, renewed support for American world leadership has not translated into new support for a beleaguered President Joe Biden; nor have Donald Trump and other intervention-skeptical, populist Republicans lost any momentum as a result of the war.

A scenario is easy to envision in which three years from now Russia and Ukraine are both engulfed in chaos, and NATO, larger and more expensive than ever, is tasked not with defending the continent against a malevolent superpower but with doing on the borders of Russia what America tried for twenty years to do in Afghanistan. How many billions—or trillions—would Americans want to commit? How many lives? If Trump is president again, his policy preference will be clear enough. If a Democrat is still in the White House, the populist Right might make even greater inroads with public opinion, reaping the reward as another liberal administration loses the afterwar.

The situation in 2025 could be better than this; it could also be worse. And five or ten years further down the line, will the fundamental difficulties of nation-building and taming rogue states without creating chaos be resolved? Or will the world be wracked by mounting instability, as population declines in wealthy countries and bulges in very poor ones, while the West accounts for a dwindling proportion of global GDP? Under such conditions, the West will have to prioritize its own stability over-policing an international order.

The time for American policymakers to get ahead of these developments is now. That means moving away from what is still a default policy of American primacy and replacing it with policies designed to promote something like a multipolar liberalism. Sunset NATO and in its place foster a genuinely European alternative. The liberal and democratic states of Europe are quite wealthy and populous enough to provide for themselves, and in so doing they will also become better prepared politically for whatever regional instability might arise to the east or the south.

The wealthy democracies of East Asia should also form a nexus of strength capable of moderating, if not altogether checking, Chinese ambitions. For its part, the United States should view China primarily as an economic rival and espionage threat. If China engages in military adventurism it will only create new problems for itself. The weakness of every state in the world today is the fragility of its legitimacy, which is not typically improved by forcibly absorbing and trying to govern hostile populations.

In general, our policy ought to take greater account of supply chain vulnerabilities and our strategic economic needs. Economic nationalism should be seen not only in light of national defense, in the strict sense, but also as a means of ensuring American prosperity in the event of greater global instability. Our interests also call for continued close economic cooperation with other advanced liberal states and a greater focus on development in the Americas and Africa. Controlling immigration and fighting human trafficking and opioid smuggling should take precedence over fighting wars in faraway places.

These are largely the policies of the nationalist, populist Right, and liberals will balk at them. Yet they are the only policies that have a hope of saving the liberal West from its current state of entropy. Wars for democracy abroad tend to exhaust democratic legitimacy at home; the fruits of victory are too often bitter. That’s because the United States has no way to guarantee that a noble regime will arise in the aftermath of a conflict. Americans used to believe that our own regime was noble, but when our foreign policy is such a source of shame and disappointment, the public quite naturally believes that something is deeply wrong with our institutions. To restore faith in those institutions requires a shift in policy orientation, toward an approach that is less idealistic, thus less prone to disillusionment, and that places the needs of ordinary Americans first.