Why Biden’s Foreign Policy Looks so Similar to Trump’s 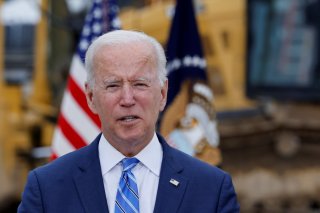 Council on Foreign Relations president Richard Haass recently wrote for Foreign Affairs that President Joe Biden is determined to carry on a Trumpian nationalism that rejects American internationalism at precisely the time when it is needed most. The dawn of a new consensus looms in Washington, DC: The dawn of America First. Despite the Biden administration’s rhetoric of internationalism, “there is far more continuity between the foreign policy of the current president and that of the former president than is typically recognized,” Haass writes. The new consensus perhaps pushes aside a strategy that evolved in the wake of World War II. The present paradigm is hardly isolationist, but it rejects the core tenet of internationalism that the United States has a vital stake as a shareholder to actively prevent collapse and preserve the international liberal order.

Haass admits there were mistakes made during the hubristic “unipolar moment” after the end of the Cold war, including a failure to stem China’s rise, decisions to expand NATO that sparked Russian revanchism, and of course the Iraq War. But Haass is wary of the nationalism that accompanies the new emerging realism and restraint consensus:

Accompanying this focus on great powers is a shared embrace of American nationalism. The Trump administration eagerly adopted the slogan and idea of “America first,” despite the label’s origins in a strand of isolationism tinged with sympathy for Nazi Germany. The Biden administration is less overt in its nationalism, but its mantra of “a foreign policy for the middle class” reflects some similar inclinations.

What is the evidence of this emerging new nationalism?

“America first” tendencies also characterized the Biden administration’s initial response to COVID-19. U.S. exports of vaccines were limited and delayed even as domestic supply far exceeded demand, and there has been only a modest effort to expand manufacturing capacity to allow for greater exports.”

Beyond that, the Biden administration, while nominally talking about values and democratic unity in the face of rising authoritarianism, has continued to work with both authoritarian leaders such as in the Philippines, and majoritarian non-liberal democracies such as India. Interests trumped (for lack of a better word) values, as long as the goal was to balance China in a great power rivalry.

Moreover, Haass is extremely concerned with the instinct to pull out of the greater Middle East, where he finds a distinct overlap between Biden’s realism and Trumpian retrenchment.

Central to the new foreign policy is the desire to pull back from the greater Middle East, the venue of the so-called forever wars that did so much to fuel this paradigm shift in U.S. foreign policy. Afghanistan is the most striking example of this shared impetus.

This isn’t the first time Haass has shown concern about pulling out of Afghanistan. On August 21, he tweeted, “The alternative to withdrawal from Afghanistan was not ‘endless occupation’ but open-ended presence. Occupation is imposed, presence invited. Unless you think we are occupying Japan, Germany, & South Korea. And yes, withdrawal was the problem.” Open-ended presence in this context is a euphemism for garrison diplomacy, a refined version of coercive imperialism. Haass writes that not only is Biden following the Trump act on retrenchment, he is doing so in a Trumpian way by carrying it out unilaterally.

Like Trump before him, he considered the war in Afghanistan a ‘forever war,’ one he was determined to get out of at any cost. And Biden didn’t just implement the Trump policy he had inherited; his administration did so in a Trumpian way, consulting minimally with others and leaving NATO allies to scramble.

The same unilateralism, also on display in the creation of AUKUS, has harmed transatlantic ties. “Multilateralism and an alliance-first foreign policy in principle gave way to America-first unilateralism in practice,” Haass writes, adding “In the absence of a new American internationalism, the likely outcome will be a world that is less free, more violent, and less willing or able to tackle common challenges.”

Apart from incoherence, some of the accusations are somewhat baffling. It is understandable that the U.S. government prioritized vaccinating its own population. Vaccines are the primary arsenal to tackle a pandemic against the threat of infection, and it is unclear why Haass would rather have the world benefitting from American charity, presumably at the cost of American taxpayers. Hard times require trade-offs. AUKUS is itself a multilateral treaty, just not the countries Haass would prefer to be aligned with. Haass would have the United States align with social-democratic West Europe, especially the EU core ruled from Brussels, even when the EU core has taken freeriding to an art-form, and would rather side with China. America, in very crude terms, aligned with the core Anglosphere and passed the buck on EU security to Europe.

No matter how it would have happened, there was no way of pleasing all sides. The Australians came to the British, who then came to the United States. Should Washington have said no? Haass’ argument is predicated on the conception that America is losing credibility in Europe. The evidence is lacking. If France, Germany, and the rest of Europe were genuinely worried about the credibility of American cooperation, as well as major Russian invasion threats, we'd see immediate “internal balancing” and rapid rearmament. That is the only measurable criteria to judge actual loss of military credibility. Unless that happens, we can chalk it all up to rhetoric, optics, and domestic politics.

With AUKUS, and the subsequent Greco-French defense entente targeted towards Turkey, the era of massive ideological alignments are over, and smaller, purely military and strategic pacts are back. In a way, this is a return to the norms that existed before World War I. That is not a bad thing. These arrangements share burdens, are narrow and interest-oriented, and avoid both ideological wars and freeriding. They also favor natural great powers, over disproportionately influential, ideological, and activist small states. It creates a far more natural order of affairs.

It was also absurd to claim that the United States should have continued policing Afghanistan and the Middle East, especially after the top U.S. military leadership testified that the strategic situation would not have changed. For a start, the United States isn’t really retrenching from the Middle East. The U.S. Navy’s Fifth Fleet is still based in Bahrain, for example. Beyond that, the idea that the Middle East is of equal strategic importance as West Europe or East Asia is frankly not grounded in reality. Theoretically, no one can launch a seaborne invasion of the U.S. mainland. No threat there is existential to U.S. survival.

However, potential great power or hegemonic threats originating from West Europe and East Asia might be. Geography is destiny. The botched evacuation and withdrawal were not the fault of the civilian leadership and should entail resignations from top generals for incompetence. The withdrawal was planned and decided over a year and a half back, in a bipartisan political decision by two different presidents. The reality is that the military leadership didn't want to follow through with civilian political orders and wanted to remain. As a result, they delayed the withdrawal to the point where it was botched. At last week’s Congressional hearing, they were trying to save skin by blaming their institutional incompetence on civilian leadership. There would have been no status quo with 2,500 troops. To claim otherwise is to misunderstand conflict, grand strategy, Afghanistan, and the greater Middle East. The choice was always either “leave” or “surge.”

The final issue was about Biden’s “Trumpian” tone. Haass is not the only one to argue about rhetoric. Shadi Hamid, of the Brookings Institution, argued that Biden is not a progressive, but a Trumpian nationalist. Stephen Wertheim of the Carnegie Endowment for International Peace countered that there is a difference between the two. The discomfort among a section of academic progressive-realists to find out that realpolitik (the acts, not the theory) requires a steady dose of nationalism to sell to the electorate, as well as an instinct of bulldozing machtpolitik, is somewhat amusing to observe, but it does not change the reality. Foreign policy is neither an ideological crusade nor a feel-good club or fellowship, but an uncomfortable, morally gray coexistence with questionable countries. To paraphrase former French diplomat Gerard Araud, the world is a jungle without judges and policemen where one’s goal is not converting carnivores to vegetarianism but not to be eaten. The ideas that drove the civilizing missions in Afghanistan and foreign ideology imposition in the Middle East are still entrenched in the bureaucratic and defense circles, as well as certain think tanks, often funded by foreign countries and lobby groups and copious grants from the War on Terror era. But the political winds of the country have changed. That should be reflected in a new counter-elite, which is the ascending realism and restraint movement.

To borrow a phrase from The Godfather, the effete military-NGO-complex that wrecked American relative power for over twenty years were “peacetime consiglieres.” In a new era of great power competition, amoral, unsentimental, realist counter-elites are required. America is in relative decline, and understanding the difference between relative decline, and absolute decline and collapse are vital to employ a new grand strategy. Some of the flaws Haass mentions in his essay, such as NATO expansion, and futile wars like Libya and Iraq, were not just random occurrences. They were the fruits of his favored internationalist worldview. The NATO expansion was a direct result of a Clintonian grand-strategy of democratic peace theory. American wars and proxy wars in the Middle East were a logical conclusion of the idea that semi-feudal societies could be transformed to democracies regardless of their history or geography, tradition, and culture if America leads the way.