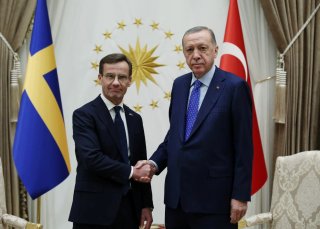 Turkish president Recep Tayyip Erdogan announced on Tuesday that his government had formally requested that Sweden work towards countering “terrorism” as a precondition to Ankara’s approval of its request to join the NATO military alliance, reiterating earlier statements by Turkish government officials as the country’s accession process stalls.

“We understand their security concerns, [but] we want Sweden to respond to ours,” Erdogan said during a meeting with Swedish prime minister Ulf Kristersson at the Turkish presidential palace in Ankara. In his remarks, Erdogan said that he “sincerely wished” for Sweden’s accession but demanded concrete steps from Stockholm before the Turkish government could approve its entry into the alliance. The Turkish leader indicated that the two nations were scheduled to hold another meeting on resolving Ankara’s concerns surrounding the bid later in the month but did not specify the date.

Sweden and Finland, which maintained military neutrality throughout the Cold War, began to explore entry into NATO immediately after Russia’s invasion of neighboring Ukraine in February. The two nations’ parliaments each approved their governments’ support for accession in May and both signed the accession protocols at NATO’s annual summit in July. Twenty-eight out of NATO’s thirty member states have approved their application. Turkey and Hungary are the only two nations that have not done so. The Hungarian government has submitted the approval bid to its parliament which is slated to debate the measure at a future date.

Turkey has objected to Swedish and Finnish entry into NATO on the grounds that the two countries host individuals and groups regarded by Ankara as terrorists. Although the Workers’ Party of Kurdistan (PKK), a Kurdish secessionist group active in southern Turkey and Turkish-occupied northern Syria, is regarded by the EU as a terrorist organization, some of its members reside in Sweden, prompting Turkey to demand their extradition. Moreover, Turkey has classified other Kurdish groups, including the People’s Protection Units (YPG), as terrorists, even though most other Western governments have not.

In June, as part of a memorandum of understanding providing for Ankara’s eventual approval of the Swedish and Finnish NATO bids, Turkey provided both countries with a list of Kurdish residents to extradite. It is unclear how many of them have since been extradited. Although Sweden announced the extradition of a Turkish citizen in August, it claimed that that case had not been connected to the broader NATO issue.

In public remarks immediately after the meeting, Kristersson described it as “very productive,” insisting that his government would support law and order and Sweden would “live up to all the obligations made to Turkey in countering the terrorist threat.”