The Israel-PIJ Mini War Was All About Hamas 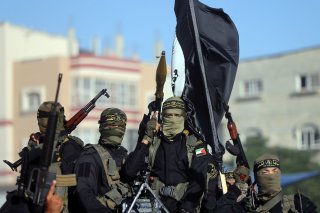 The brief but intense sprint of violence between Israel and the Palestinian Islamic Jihad (PIJ) that took place across the Gaza-Israel border earlier this month is interesting because of what did not happen during that mini-war. On the surface, the confrontation was simply the latest eruption of violence between Israel and a Palestinian terror group committed to the Jewish state’s destruction. But what appeared as a bilateral escalation had an important regional context: the PIJ was established in 1981 by Iran’s intelligence apparatus. The latter’s support of the PIJ is part of Iran’s continuous efforts to expand its influence in the Middle East at large: in Iraq, Syria, Lebanon, and Yemen

The recent confrontation’s immediate trigger was Israel’s apprehending on August 1 of a senior PIJ operative in the northern West Bank. The organization, whose headquarters and nearly all its operational capabilities are located in the Gaza Strip, vowed to retaliate. This, in turn, propelled the highest state of alert in Israel’s western Negev. Israel Defense Forces (IDF) units stationed there were reinforced, Iron Dome anti-rocket batteries were placed in a ready-to-launch state, train travel was suspended, roads were blocked to civilian traffic, all educational activities were suspended, and farmers were instructed to stay away from their fields.

Unable to tolerate the high state of tension and the paralysis of the western Negev’s economy for more than a few days, and allegedly obtaining specific intelligence of an immediate PIJ plan to launch a retaliatory attack, on Friday, August 5, Israel launched a preemptive strike: Operation Breaking Dawn. The mini-war lasted only seventy-two hours but was quite intense, with the PIJ launching some 1,200 rockets and other ordnances and Israel deploying its air force against PIJ targets in Gaza.

At the operational level, as a relatively small organization, PIJ could not have been expected to withstand Israel’s robust firepower and technological and intelligence capabilities. Indeed, the PIJ’s limited capacities are said to have been further downgraded during the recent encounter. It lost three of its senior officers: the commanders of its southern and northern battalions as well as of its unit utilizing anti-tank weapons.

Yet during the same three days of fighting, the PIJ managed to launch some 1,200 rockets and other projectiles against Israel. Even if more than 200 of these projectiles landed inside the Gaza Strip and resulted in some Palestinian fatalities, this is a non-trivial achievement for a relatively small terror group. Much less surprising is that Israel’s Iron Dome system was able to intercept 95-97 percent of the rockets identified as heading toward populated areas. Still, the psychological effect of PIJ’s imperfect firepower was considerable—the Israeli population of the south was held hostage for days, as the PIJ continued to launch rockets until the mutually accepted ceasefire took effect.

The Supremacy of Domestic Politics

Given the dramatic imbalance of power between the PIJ and Israel, it is not surprising that the PIJ failed to extract anything strategic from the latest eruption of violence. This is especially unsurprising since the track record of Hamas—a political movement far larger than PIJ—is similar. It, too, gained nothing from Israel in four much greater and more costly confrontations with the Jewish state: in 2008\09, 2012, 2014, and 2021. The Gaza Strip, for whose population Hamas is responsible since it violently took over the strip in November 2007, remains as isolated as ever. This raises an important question: why does Hamas, and now PIJ as well, continue to engage in such repeated violence despite their proven futility?

The answer to this riddle seems to be that while Hamas and PIJ, both physically and rhetorically, appeared to be fighting Israel in these encounters, their motivation to do so has little to do with Israel and almost everything to do with Palestinian domestic politics. This was very clear in May 2021; Hamas’ decision to attack was largely propelled by its anger at Palestinian Authority president Mahmoud Abbas’ reneging on his promise to hold presidential and parliamentary elections. Hamas’ decision to launch the opening salvo of these rockets in Jerusalem’s direction—seemingly in response to clashes in the Sheikh Jarrah neighborhood and to Israel’s perceived attempts to change the status quo on Temple Mount (or Haram a-Sharif)—was meant to challenge the Palestinian Authority by demonstrating that it was impotent to defend Palestinian interests in Jerusalem and to position Hamas, instead, as the guardian of Palestinian rights in the Holy Basin.

Similarly, and realistically, PIJ’s rockets were launched earlier this month not to extract meaningful gains from Israel—not even the release of its senior operative who Israel apprehended a few days earlier—but to strengthen itself versus Hamas by exposing the latter as having betrayed the Palestinian cause by abandoning the armed struggle against Israel. PIJ sought to position itself as the only Palestinian organization still committed to fighting the Jewish state.

Hamas’ decision to refrain from joining the recent fighting may have been supported by a majority of the Palestinians in Gaza who did not wish for the fighting to extend and escalate. Such extension would have led to further loss of life and to halting the economic gains associated with the recent relaxation of Israeli restrictions, most importantly the permission for a greater number of Gazans to cross into Israel in pursuit of more gainful employment. The resulting broader public support of Hamas’ stance notwithstanding, PIJ leaders probably calculated that their small organization would gain significantly even if only a few hundred of the most-radical members chose to abandon Hamas due to its perceived betrayal and join the PIJ instead. Thus, what may look senseless in the Palestinian-Israeli arena may make perfect sense for the PIJ within the Palestinian domestic scene.

On the Israeli side, the most interesting aspect of the recent mini-war was the quality and quantity of information the IDF released regarding its operational and intelligence capabilities. This included reports about the performance of highly sensitive precision technologies, with detailed explanations of how these technologies work. Some of the reports concerning the manner in which PIJ senior commanders were killed with hardly any casualties among uninvolved civilians and very little damage to surrounding physical structures, also pointed to the sources and methods deployed by Israel’s security and intelligence communities.

Israel’s release of such reports during Operation Breaking Dawn continued an important change in its information policy implemented gradually over the past few years, advertising Israeli operational capabilities that in previous decades would have been kept highly classified. In the broader Middle East, this included reports of Israeli intelligence operations inside Iran—notably, the smuggling of Iran’s nuclear archive—and advertising the magnitude and sophistication of Israeli strikes in Syria. While some of these information releases may have been politically motivated, the consistency with which these occurred points to a changed approach, compromising sensitive information in the hope of enhancing deterrence.

The target audiences of Israel’s sharper messages were not limited to Israel’s adversaries such as Hamas, Hezbollah, Syria, and Iran. An equally important audience was Arab states that either already joined the Abraham Accords or are considering doing so, notably Saudi Arabia and other members of the Gulf Cooperation Council. Greater awareness of Israel’s robust capabilities and willingness to assume the costs of protecting its interests is expected to further increase these states’ interest in closer security ties with Israel.

What Did Not Happen

As noted earlier, the recent eruption of violence between Israel and the PIJ is interesting mostly because of what did not happen during that mini-war. At the global level, it is noteworthy that Israel faced no significant criticism. The Biden administration backed Israel’s right to defend itself and the Kremlin’s criticism was minor, thus avoiding an opportunity to take some revenge against Israel’s critique of Russia’s invasion of Ukraine.

At the regional level, most noteworthy was Turkey’s refrain from criticizing Israel’s conduct vocally as it did in the past. This, in turn, reflects the significant recent warming in Turkish-Israeli relations that includes far closer cooperation between the two countries’ security and intelligence communities. Their progress on reconciliation was apparent in mid-June when the two governments cooperated in thwarting Iran’s attempts to assassinate Israelis in Istanbul.

Other than understandable calls for an immediate cessation of violence, this time around even the usually critical chorus of Arab foreign ministries remained largely silent. Egypt and Jordan were focused instead on attempting to bring about a quick ceasefire, while key Abraham Accords states—the UAE, Bahrain, and Morocco—whose defense relations with Israel have improved dramatically since the signing of the 2020 accords, have also kept quiet.

Within Israel, any repetition of the violent protests by Arab citizens experienced during the Israel-Hamas war in May 2021 was now avoided. This refrain was largely the result of efforts made by the Israeli Arab business community and other local leaders, especially but not exclusively in mixed Arab-Jewish cities. The purpose was to avoid the significant economic costs that were associated with the violence in 2021. At least as important was the divided reaction of Israeli Arab political leaders. While the Joint List headed by Member of Knesset (MK) Ayman Odeh condemned the IDF’s conduct, the United Arab List [Ra’am], headed by MK Mansour Abbas, refrained from any such criticism, remaining silent throughout the confrontation.