Containing China Amid the Ukraine Crisis 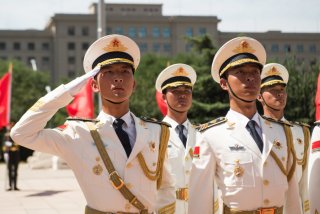 AMONG THE foreign policy challenges currently faced by the United States, two pose the greatest potential risk to our security and the future of the global order. One is the challenge posed by China as a rising power seeking to overtake the United States as the world’s preeminent power. The other is Russia, a declining power committing a shocking act of aggression against Ukraine in a futile bid for imperial restoration.

While the challenge of the Russian war in Ukraine is urgent, from a national security perspective, China, of course, presents the more serious and comprehensive threat, with economic, political, technological, and military dimensions. Even as we deal with Ukraine, the Chinese challenge must remain our central focus. For most of the post-Cold War period, this has not been the case, allowing for the continual rise of China to which we continue to contribute.

After the disintegration of the Warsaw Pact and the Soviet Union, we focused on Europe. We expanded NATO eastwards and shouldered a disproportionate responsibility for European security in dealing with the challenges of the Balkans, while our allies failed to carry their fair share of the burden. After 9/11, we became focused on the War on Terror, which expanded into nation-building projects in Afghanistan and Iraq.

Instead of focusing in earnest on the rising Chinese threat, we continued essentially with the same policy on China as during the Cold War, altering only the accompanying rationale. We had embraced China during the last phase of the Cold War because of our belief that the Soviets were getting stronger relative to the United States. The thinking was that, given the Soviet-Chinese hostility, a stronger China served our interest. But even as it became clear that the Soviet Union was far weaker than we had known, and even after it disintegrated, we continued to celebrate our embrace of China instead of questioning it. Would our policy towards China have been the same if we had a more accurate appreciation of Soviet weaknesses and the potential dissolution of the Warsaw Pact and the Soviet Union? Perhaps—but we had opportunities to reassess and reconfigure, and those were missed.

Instead, after the Cold War, we continued to pursue policies that strengthened China on the assumption that economic progress would democratize it and undermine the rule of the Chinese Communist Party (CCP). That did not happen. China remains authoritarian, and with its progress in the employment of digital technology, it has become a surveillance state—treating its people brutally. For illustration, we need look only to its treatment of its people and their pets in recent months in places such as Shanghai, in the name of controlling COVID-19.

China is moving on many fronts in its quest to become the world’s preeminent power. Regarding technology, it may now be ahead of the United States in some areas. Its military power is growing. The Chinese have also achieved vast progress economically. For much of this, critical Chinese gains have been achieved through our own complicity and through their shrewd use of opportunities provided by the American private sector.

Lured by inexpensive labor, rapid and cheap production facilities, and the promise of a massive consumer market, American companies moved significant manufacturing to China—in the process often also giving up valuable intellectual property. The U.S. government did not prevent this, and until recently arguably encouraged it. As a result, while China has become more prosperous and more powerful, we have become critically dependent on China for the supply of essential products in key areas, and have even granted them unprecedented access to our intellectual capital and scientific resources. We are only beginning to wake up to this unwelcome reality.

The CCP is using economic power to extend the tentacles of Chinese influence around the world. Many countries have become heavily indebted to Beijing. They are leveraging their economic ties and the so-called Belt and Road Initiative for geopolitical advantage. They have pursued a strategy to control rare earth minerals in Africa and are in a dominant position with regard to processing some of them. The aim is to make others, including the United States, catastrophically dependent. They are also positioning themselves around the world to threaten sea lanes critical for global commerce.

China seeks to overextend the United States externally by supporting U.S. adversaries such as Iran and North Korea. It also undermines us from within by promoting disunity, damaging trust by the American people in U.S. institutions through instruments such as TikTok, and getting the youth of our country addicted to Chinese-manufactured drugs such as fentanyl. These are vulnerabilities that we must acknowledge and address.

Now, into this situation, comes Ukraine. Whether it redounds to the benefit of China or to a reinvigorated West will depend on us. Putin’s invasion holds serious risks, but also important opportunities. Our European allies seem to be realizing, at long last, that they face very real security risks and must take them seriously. This can be done by budgeting for realistic defense and by reducing their dependence on Russian energy supplies. On both, they are committing to take real steps in the right direction.

The poor showing of Russia in Ukraine has also created new opportunities for more defense cooperation with countries such as India and others that relied heavily on Russian military equipment. The vigorous Western response, clearly a surprise to Russia, has demonstrated to the world that the West can come together when challenged. We must ensure that the positive initial response from Europe continues and increasingly results in European allies doing the heavy lifting within their own neighborhood. A protracted and costly conflict in Europe that absorbs U.S. military power and diplomatic attention and makes Russia increasingly dependent on China will serve Chinese purposes similar to what happened after 9/11. Therefore, an expeditious ending to that conflict through a negotiated settlement acceptable to both Russia and Ukraine is important. The terms of a possible settlement will be mostly shaped by the military realities and expectations of the two sides in the coming months.

It is also important that the United States pay attention to the Middle East to preclude Iranian hegemony in the region, limit the growth of Chinese influence, and look for opportunities. For example, Russia may soon be unable to sustain its position in Syria. Iran is unlikely to give up its pursuit of a nuclear weapons capability, with or without an agreement with the United States, and this will remain an ongoing challenge. We must maintain and build more strong partnerships with allies and friends in the Middle East, with states that can work with each other and with us to counter-terrorism and deal with unpredictable developments in this turbulent region. We must ensure that the United States does not become overextended and reinforce our military presence with a strong economic and diplomatic footprint. Building on the Abraham Accords, for example, serves U.S. regional interests and global stability by creating cooperative bonds among states that are focused on peace and growth.

In Central and South Asia, we should promote regional connectivity, reform, and cooperation. There is an opportunity to gain Taliban cooperation on issues that benefit regional stability, as they too have a major problem with ISIS. The platform for obtaining this cooperation is readily at hand, in those elements of the Doha Agreement that were signed by the United States and the Taliban but were not yet implemented. Many former senior officials of the former republic are now embracing the Doha agreement as the most feasible path to peace and unity in Afghanistan. It is fortuitous that we are no longer at war in Afghanistan with thousands of troops on the ground: Moscow very likely would have shipped significant military supplies, such as anti-aircraft systems, to the Taliban in retaliation for our support to Ukraine.

When it comes to China, the United States should pursue a comprehensive containment strategy and do so on a bipartisan basis. We face a grave threat that should focus our attention and unite us. The key elements of such a strategy should be:

First, the United States should strengthen its might for the range of challenges that China can pose. This also means working to build and sustain an appropriate balance of power in Asia. Given the Chinese threat to Taiwan, we should preposition military supplies in Taiwan because resupplying the island after a Chinese attack starts will be much harder than what we have faced in Ukraine—a nation that shares a border with nato ally Poland.

Second, we need to ensure our technological lead, whether in 5G, hypersonics, artificial intelligence, or manufacturing high-quality semiconductor chips. In some of these key areas, we are deficient—in quality chip manufacturing, for example, we are critically dependent on outside suppliers. One such supplier is Taiwan, which only adds to its importance to the United States.

Third, we should examine and address shortcomings and vulnerabilities in our supply chain. Continued dependence on China for key needs, whether in technology, minerals, medicine, or processing, is reckless. The on-shoring, near-shoring, and ally-shoring processes must be monitored and accelerated.