The Indo-Pacific Region Can't Be Won Without Supersonic Bombers 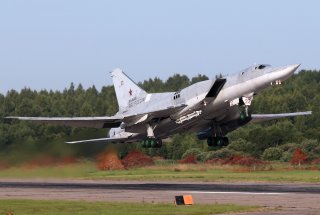 Here's What You Need To Remember: Subsonic or supersonic, ship-hunting bombers appear set to play a major role in the naval warfare capabilities of China, Russia, and the United States into the mid-twenty-first century—nearly a century after Billy Mitchell sought to demonstrate their potential on a hapless German battlecruiser.

The highest-stake geopolitical clash taking place today is for control of the waters of the Asia-Pacific. Will China assert de facto dominion over large expanses of those waters thanks to its growing military power, and thus be positioned to dictate terms to states like Japan, Vietnam, and Australia? Or will the United States and its regional allies maintain a credible countervailing presence?

In that context, the once-moribund strategic bomber—formerly seeming a vestige of the Cold War nuclear strategy—has reemerged to prominence. That’s because the distances stretching across the Pacific demand large aircraft with the range to match. And one of their chief roles will be one of the heavy bomber’s oldest: sinking enemy ships.

Even in the earliest days of military airpower, large land-based bombers were seen as potent anti-ship platforms. In 1921, airpower advocate Billy Mitchell arranged a demonstration in which Army Air Corps bomber attacked the German World War I battleship Ostfriesenland, which had been ceded to the United States as a war reparation.

The first four waves of bombers that attacked on July 20 failed to dent the vessel’s top armor, but near misses caused flooding in her hull compartments. Then the fifth and sixth wave on the morning of July 21 employing heavy 1,000- and 2,000-pound bombs burst open a hole that accelerated the flooding, causing the battleship to sink by noon. You can see footage of the attack here.

Ironically, when finally combat-tested in World War II, the high-flying heavy bomber proved too inaccurate to reliably hit moving warships, though British Lancaster bombers did finally consign the immobilized battleship Tirpitz to a watery grave in a Norweigian fjord in 1945. Instead, more agile single-engine attack planes and twin-engine medium bombers proved far more successful in the anti-ship role. However, World War II also saw the first successful guide of the air-launched anti-ship cruise missile, one of which sank the battleship Rome.

During the Cold War, the Soviet Union built up a large force of cruise-missile armed bombers intended to counter the might of U.S. carrier task forces. The U.S. Navy responded by deploying high-speed F-14 Tomcat interceptors with long-range Phoenix missiles it hoped could thin out incoming bomber formations before they unleashed an unstoppable missile volley.

While the Soviet bomber assault scenario was fortunately never tested in combat, the Falkland War in 1982 provided ample evidence that air-launched anti-ship cruise missiles were likely to be highly effective against ships.

Even China’s reverse-engineered Soviet Tu-16 Badger jet bomber, the H-6, is still operated by both the Chinese Navy and Air Force. In fact, the PLA Naval Air Force just began introducing a new H-6J anti-ship variant with a combat radius of 3,500 miles.

The new anti-shipping mission is less about targeting airplanes and more the missiles it carries, allowing bombers to strike at ships bristling with air defense missiles without entering their reach. Older air-launched anti-ship missiles such as the American AGM-84 Harpoon (range 150 miles), Russia Kh-22 (370 miles) and Chinese YJ-8 are being superseded by a new generation boasting greater range, speed, and evasiveness versus countermeasures, as well as smarter guidance systems.

All that’s required to convert a land-attack bomber to a maritime strike role is the integration of the appropriate anti-ship missiles and surface-searching synthetic aperture radar (SAR) which can detect, classify and engage ships.

For the United States the new lynchpin of anti-ship strategy is the AGM-158C Long Range Anti-Ship Missile (LRASM), a variant of the JASSM stealth cruise missile. LRASM is stealthy, boasts both radar and infrared guidance, and is estimated to have a range of 350 miles, though it’s not particularly fast. A B-1 bomber can carry a whopping 24 LRASMs, while Navy Super Hornet fighters can carry two each.

The Air Force is next looking to integrate the AGM-158C into its seventy-six B-52 bombers (currently equipped to fire Harpoon missiles). A B-52 could carry twelve LRASMs underwing and eight more in its new internal rotary launcher.

However, a bomber’s missiles may well outrange its sensors. While bombers could certainly contribute to searches for adversary shipping, quite likely potential targets will more often be relayed to them by other maritime surveillance assets such as MQ-8C Triton drones, P-8 patrol planes, autonomous surveillance submarines, and satellites.

Pushing data from spotters to shooters is known as “forming a kill chain,” and heavy bombers could serve as a more reactive element in such a chain thanks to their greater mobility and the fact that they combine sensors and weapons in one package.

Meanwhile, Russia and China have focused more on high-speed anti-ship missiles. Russia’s upgraded Tu-22M3M bomber can carry three each of the new Kh-32 (estimated 370–620 miles, speed claimed to be around Mach 4 or 5). Meanwhile, new Chinese H-6J bombers can carry up to seven YJ-12s with a range of 250 miles, traveling at speeds between Mach 2 and 4.

Whither the Supersonic Bomber?

High speeds are not necessary for either standoff attack aircraft (AKA “missile trucks”) or stealthy, penetrating bombers like the B-2 Spirit. However, speed can aid in the maritime strike role by allowing a bomber to rapidly close with a target, launch missiles and then get the hell out of Dodge before they can be intercepted by enemy fighters.

The problem remains that large, supersonic aircraft are expensive to operate. For that reason, while the Air Force’s supersonic B-1 Lancer outperforms the B-52 in speed, stealth, and payload, the Air Force is still mulling retiring the former because it’s proving harder to maintain. Earlier in the 1990s, the Air Force also retired its swing-wing F-111 supersonic medium-range bombers, designed to fly close to the ground at very high speeds.

China and Russia, however, continue to operate medium-range supersonic strike bombers with anti-ship capability, notably the Su-24, Su-34, and JH-7. There are unconfirmed reports that China may be also developing a supersonic medium-range stealth bomber provisionally dubbed the JH-XX. As future sensors may lessen the advantages provided by stealth, it’s possible that speed will regain importance as a means to ensure survivability.

Subsonic or supersonic, ship-hunting bombers appear set to play a major role in the naval warfare capabilities of China, Russia, and the United States into the mid-twenty-first century—nearly a century after Billy Mitchell sought to demonstrate their potential on a hapless German battlecruiser.

Sébastien Roblin writes on the technical, historical and political aspects of international security and conflict for publications including The National Interest, NBC News, Forbes.com and War is Boring. He holds a Master’s degree from Georgetown University and served with the Peace Corps in China. You can follow his articles on Twitter. This article appeared in 2019 and is being reposted due to reader interest.